Our Code of Conduct

Each participant in the Event acknowledges and accepts our “Code of Conduct” and accept full responsibility for their adventure and commit to promoting goodwill, promoting cultural awareness and tolerance. Crews agree to respect the laws, customs, traditions and people of the Southern Africa, but above all you pledge to look after our treasures: the animals, the flora and fauna and the most beautiful landscape in the world.

The Put Foot Rally is all about having fun, giving back to those less fortunate and generally having the time of your life. It is not the Event’s or its participants’ place to pass judgment or comment on politics, religion or the laws of the countries visited during the Event.

This Code of Conduct governs each Crew Member’s participation in the Event. Each person has a duty to remember at all times that the Event and its participants are guests in each country visited, and that despite the fact that we may come from across the world, with our own approach to life, personal beliefs and values, this Event is not only about respecting each other, but more importantly respecting the people of Africa and abiding by their beliefs, their rules and ultimately their way of life.

Each participant agrees to take part in the spirit in which The Put Foot Rally is presented, envisaged and intended; to promote Africa to the world, acting as Ambassadors for “The greatest road trip adventure on the face of the Earth” while displaying a never-ending passion and energy to ‘leave the world, in better shape than we found it’.

Each Crew takes responsibility for their actions and the actions of each of the Crew Members at all times which includes embracing and abiding by the following:

HOW TO KEEP THE GOOD TIMES ROLLING:

Get early-bird access to last minute deals on
the latest rallies! 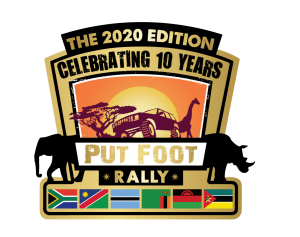